Graveyard Polka by B. C. Nance 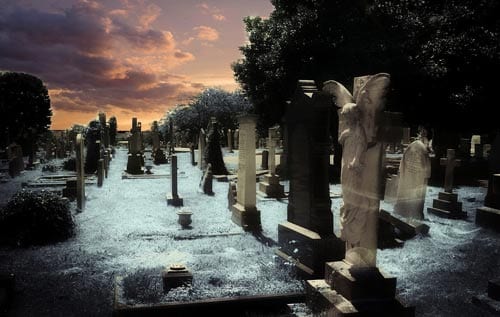 “Listen, now,” Victor said to the cab driver, “you drive to the front gate and wait thirty minutes…” Victor paused and looked at the western sky, now fading from a deep orange to purple. “Wait fifteen minutes,” he continued, “then come back for me.”

“Look, pops,” the driver said, “I’m not letting you out of my sight until you pay the fare.”

“Fifteen minutes,” said Victor.  “Then you pick me up, take me home, and I pay you.  Not a penny before.” He opened the door and carefully slid himself out of the back seat.

“No deal,” the driver said. “Besides it seems kind of creepy leaving you in the middle of a cemetery so close to dark.” The driver’s brow furrowed, drawing his bushy eyebrows together, and he tugged at his wild beard.

“Oh,” Victor mocked, “what are you afraid of you big baby? Do you think the ghosties will come and get you?”

“Watch your mouth, old timer,” the driver said, “or you’ll be walking home.”

“Who are you calling old?” Victor said. “Step out and I’ll show you who’s old.” Victor struck the cab with his cane, a glancing blow that did no damage, but he stumbled backward, barely catching himself before tumbling to the ground.

“And what will the big baby do?” Victor poked the cab again. “You do what I tell you or you won’t get paid.”

“Fine,” said the driver. “Have a nice walk home, old fart.” The tires squealed, and the cab was gone before Victor could swing the cane again.

“Who needs you anyway?” Victor said. He unfolded a piece of paper and held it up to read the directions by the fading light. He turned left and began reading off the names.

Harrison, Rose, Perry, Teague. “Aha,” said Victor, “There you are Mr. Teague.” Victor bent down and ran his hand along the top of the double stone.  With his stiff fingers he traced the engraved letters on the left side of the stone. “Hello, Alma,” he said. “I hope you won’t think me an old fool for what I’m about to do.”

Victor stood straight again and looked at the right side of the grave marker. A snowflake fluttered in front of his face. The dusky sky was beginning to sparkle with tiny crystals, but Victor knew his business would not take long.  He took off his overcoat and draped it over the final resting place of John Tyler Perry then leaned his cane against the stone.

“Douglas Redmond Teague,” Victor said in the voice of a judge passing sentence, “I vowed forty years ago that I would do this.”  Victor held his arms straight out and began to move his feet, a slow shuffle at first then he began to pick up each foot and cross it over the other. He turned around and clapped his hands, humming a tune with a name he had long forgotten. The snow falling around him, now larger flakes and more of them, gave his dance a misty dreamlike quality.

He took pains not to step on Alma’s side of the grave, but as the spirit took him Victor became more animated than he had been in years. He considered a leap in the air then thought better of it, but while executing a half spin, Victor’s feet slipped on the now wet grass, and he came down hard against the Teague’s headstone.

Victor saw a flash of stars when his head hit the stone, or maybe it was just the sparkling snowflakes that swirled around his head. Was it really this dark already? He tried to sit up, but his stiff body wouldn’t cooperate.

“What the hell were you just doing, you old fool?” came a voice from behind him. Victor craned his neck to see the deceased Mr. Teague leaning over the tombstone that bore his name.

“What do you think I was doing, you dumb Irishman?” Victor said, “I was dancing on your grave.”

“You call that a dance?” Teague asked. “I’ve seen better steps on a ladder. Besides, the writing on the tombstone faces away from the grave. I’m buried over here.” Teague pointed to the ground on his side of the tombstone.

“It still counts,” Victor said. “I vowed forty years ago to dance on your grave for taking my Alma from me, and now I’ve done it.”

“It was the Knights of Columbus dance in the summer of 1975,” Victor said. “We saw Alma across the room and I nodded to you.”

“That nod meant I was interested in her,” Victor said. He crossed his arms across his chest for warmth but none came. “I saw her first.”

“Listen, Victor,” said Teague, “This is the first time I’ve heard any of this. As I remember, Alma and Ellen were standing together, so when you nodded I thought you wanted us to go meet the two of them.”

“Alma’s cousin,” said Teague. “They even look alike, though with your eyesight…”

“There’s nothing wrong with my eyesight,” snapped Victor.

“No,” said Teague, “It’s just as good as your dancing. Always was.”

“My eyes were good enough to see you leave with Alma,” Victor said.

“Yes,” said Teague, “That you did see.” He rubbed his spectral chin and looked into the frosty night sky. “But as I recall you disappeared for more than half an hour and left me alone to meet the ladies. I just happened to hit it off with Alma. When she had to leave I walked her to her car, which is what you saw, but then I went back in and spent the next hour telling Ellen what a great guy you were.”

“I went out for a smoke,” Victor said, “And to work up my courage I had a second then a third.  Then I saw you leaving with Alma, and I never went back inside.”

“Dabrowski, you fool,” Teague said, “Are you telling me you really didn’t see the two of them standing together? And for forty years you’ve held a grudge and waited to dance on my grave?”

“Yes,” said Victor. “But at least I gave up smoking that night.”

Teague threw his head back and gave an Irish gale of laughter. “Good for you, Victor,” Teague said, “Good for you. Those things will kill you.” He patted his tombstone. “See.” Teague laughed again. “Oh, but God, don’t I wish I had one now.” He looked skyward and added, “Not that I’m complaining.”

“Oh, Victor,” said Teague, “You should have come to the house more often when we invited you,”

“I couldn’t,” said Victor, “I didn’t want to stop being angry with you.”

“Maybe you would have met Ellen again. She came over when she was in town.”

“Oh, Red,” Victor said, “You were always a better friend to me than I was to you.”

“It’s true,” said Victor. “I was always jealous of the way that women seemed to take to you right away. They flocked to you with your bright red hair and your big Irish laugh. I just wanted something that you couldn’t have.”

“I wish you just had said something forty years ago, Victor,” Teague said.

“The wasted life of an old fool,” said Victor. Victor’s voice was increasingly dream-like and took on the heavier Eastern European accent of his youth.

“Your life hasn’t been wasted, Dabrowski,” said Teague. “And it’s far from over.  Look at your successful career and your leadership in the Rotary Club. Who was the force behind the fundraisers for the School for the Blind?”

“Red,” Victor said, trying to raise his hand. “Could you give me my coat?”  Teague fetched the overcoat and draped it over his friend. “Thank you,” said Victor, “I’m tired now.”

“Listen, Victor,” Teague said with a note of concern in his voice, “I don’t think it’s such a good idea for you to go to sleep. Try to stand up and walk around a little.”

“Maybe I should just lie here,” said Victor. “They wouldn’t have to take me far to bury me.”

“You know, Victor,” Teague said, “Ellen is widowed now and lives here in town.” Victor opened his eyes and looked at Teague. “I think she would like it if you called her.”

“Old fool. Old fool. I knew it was a bad idea to leave you in the cemetery so close to dark.” Victor stirred as his body was lifted from the ground. He licked his near frozen lips and tried to speak.

“What are you afraid of you big…” Victor passed out, and the burly cab driver toted the old man’s limp body to the cab.

Victor woke warm and comfortable. He lay on a soft pillow and heard a gentle but steady beeping. “Red,” he said through his sleep fog. “Red, are you still here?” A warm hand grasped his and Victor opened his eyes. “I was just talking to Red,” he told the woman standing at his bedside. She looked at him with a concerned smile.

“The cab driver found you on Red Teague’s grave, Mr. Dabrowski,” said the woman, who seemed to be near Victor’s age but wearing it better. “He brought you here to the hospital.”

Victor stared at the woman and his eyes grew wider. “Alma?” he said.

“Forty years,” said Victor. “Forty years.  Please call me Victor.” Victor looked at her, amazed that she looked so much like Alma. “But tell me, why are you here?”

“The hospital called me,” Ellen said. “It seems that they found a note in your coat pocket that had my name and phone number on it.”

“Red,” Victor said, a smile spreading across his face, “You old dog.”

She gave Victor an indulgent smile and said, “Not at all, Victor.  Not at all.” 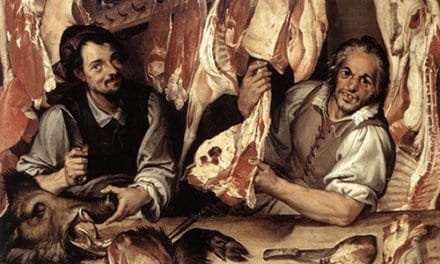 A Collection of Horror Story Haiku by Bobby Aldridge 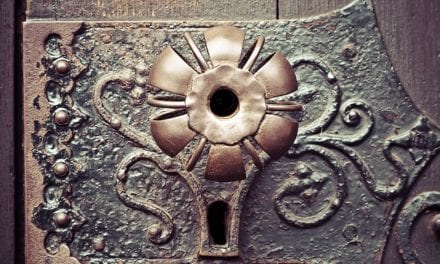 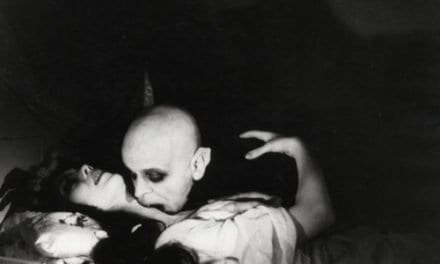 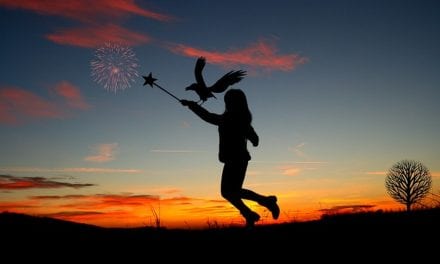