The Queen of Trees by Carol Jones

I finished my giant bowl of Lucky Charms before the trucks pulled up. A dozen men in orange hardhats assembled on the front lawn. They had all come to take down the Queen of Trees. The tree expert chatted with my father while I listened in. He said the old girl grew up with the Indians, long before roads and houses, maybe two centuries in that spot. I loved that majestic Dutch Elm. It shielded and sheltered my family home long before I knew her ancient history, but Indians and unimaginable wilderness added a deeper dimension to the onset of my grief.

“Just a shame we have to lose these beauties,” the expert said. I was furious with the explanation that she was terminal. She didn’t look sick. But other trees in the community had been removed due to an epidemic of Dutch Elm disease. The Queen had succumbed.

The tree removers got started with their ugly business early. While the sun’s rays angled through her leaves, the men unraveled ropes and harnesses in a slow, well-practiced pace. I refused to go back inside and they indulged my curiosity, sometimes explaining their equipment before they yanked hard on cords to rev their weapons. When the saws engaged, their words were swallowed in a deafening display of power.

All their pulleys and carabineers briefly distracted my thoughts from the work ahead. The Queen of Trees had never been climbable. Her first branches splayed thirty feet above the ground. I inspected the harnesses and marveled at the idea of being hoisted high into her arching limbs where I could look down upon my roof, peer into the chimney and see across the neighborhood, maybe as far as town.

I lost myself for a time, planning the best method of begging them to let me ascend on their ropes. But no matter how many polite, pleading sentences I strung together, the din of the saws prevented my request from being heard. Instead, I watched with vicarious intrigue as ropes were thrown and men raised.

Their sad intent returned with the first twigs that fell and I sank back to the reality of my Queen’s demise.

Two men dangled in her arms like marionettes. Their deafening blades lopped off fingers and joints from her top. I stood in her diminishing shadow, grieving her ruin, her absence from the spot that had belonged only to her crown and perfect beauty. Her shape transformed to sharp strokes, which only moments before had been wide, soft clouds of green.

Reduced to naked limbs, the men tied heavy ropes around each section, and lowered the severed arms slowly to a ground they’d never before touched. When only one man was left on the tapered trunk, it became trickier to lower the heavier midsection pieces. The hard-hatted men on the ground pushed me back toward the now sun-drenched house. I moved reluctantly, determined to witness this execution to the end, as if in silent protest to the injustice. Logs dropped from the sky.

As they fell, the ground shuddered and the remaining trunk swayed wildly, trying in vain to dislodge the man from his high perch. Too late, I thought, as he held fast to the mortally wounded Queen. One log dropped straight, but didn’t hold its place as the others had. It rolled, instead, toward the men, and me. One man grabbed my arm, though I could see he was being overly cautious, I thought, as the log came to rest a good twenty feet from our toes.

We all saw a bright red stain of blood at the same moment, on half the cut end. I stared, knowing for certain that it proved the Queen had been what I believed, a living thing, with a soul and breath. Her innards now oozed from the cut. All eyes went upward, the men fearing that the blood was the cutter’s. His blade went silent, increasing the anxiety on the ground. His heavy gloved hand reached into the remains of the trunk and extracted something equally bloodied and horrible—something with a black masked face, prick ears, and limp paws. A shout came down from the sky.

“Clean in half!” he yelled. Some of the men looked away. One snorted an uncomfortable laugh. There were other grunts of disgust.

“Shit, the other half is here,” said another, pointing to the ground.

Just then, the tree expert remembered my presence. He turned me from the gruesome half, held aloft like an unexpected prize. I felt something drop in my middle, like the logs as they hit the ground. I felt the thud in my throat, bile splashing up from my stomach. My innards seized, like the uncontrollable retching that accompanies the flu. Without warning, I doubled over and heaved my earlier bowl of cereal on the man’s thick laced boots, dots of colored marshmallow stuck to the leather tops. Behind me, I heard a snort of laughter and a groan of disapproval. Big hands grabbed my shoulders, steadying me before I went sideways.

“You didn’t need to see that,” said the expert’s soft voice. “I never seen anything like it. Sometimes they crouch down in the hollow trunk and hit the ground running when the logs drop. I seen that happen a couple times, squirrels and raccoons, even a ‘possum once. Never saw that,” he nodded behind me, his face askew, ignoring the mess on his boots.

I felt hot streams of tears running down my cheeks. I felt an ache in my gut and embarrassment on my face. But the vision of the halved raccoon wouldn’t leave my eyes, despite my focus on the man’s boots and the marshmallow bits. Even when I squeezed my eyes shut, the image remained, dangling above, the rest wedged in the red stained cavity of the log.

“You ok?” he asked with serious concern.

“Clean that up,” he yelled over my shoulder. It was a sharp command, delivered with an urgent undertone, almost angry. Hard to know if it was on my account or some professional workplace rule forbidding guts in plain view. My mind questioned how one would clean-up that sort of horror. I worried if I had ruined his boots with my vomit.

Just then, another sound came up from the men.

“Oh shit,” someone grumbled, acknowledging a new surprise I couldn’t imagine after the first. I tried to turn, but the strong hands held me fast in place.

“Frank, look at this,” said a voice behind us.

I pulled away harder this time, breaking his grasp. I had already seen the worst, and needed anything to replace that sight. One of the men held two small raccoons, one in each hand. Their eyes were like saucers, their bodies stiff with fear.

“They were lodged under her. Good thing we looked.” The man cradled the cubs like babes.

He came over to me, presenting the furry little balls in each hand, successfully distracting me from the earlier moment. I was transfixed with their perfect sweetness. Their soft bodies melted into my arms and I hugged them in sympathy for our irreplaceable losses.

The man with the marshmallow bits on his boots headed toward the hose-connect. The others busied themselves hauling logs toward the chipper and the trucks. I was left with my orphaned babies in a cardboard box, and more blue sky above me than I knew existed.

I could still see the ghost of the Queen above us, and the Indians and the wilderness, and of course, forever, the stain on it all. 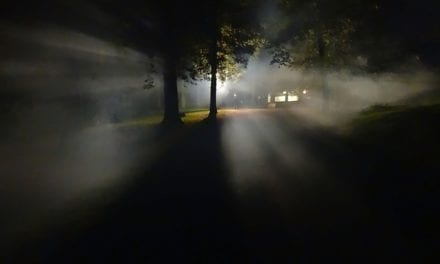 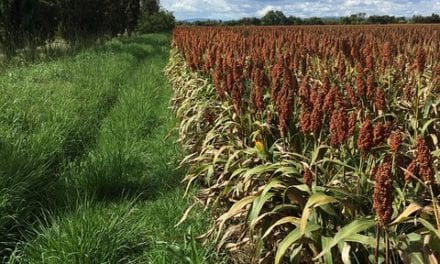 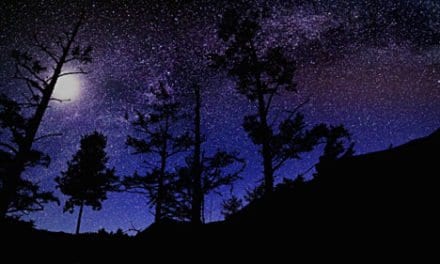 Under the Stars by Joseph Benedict